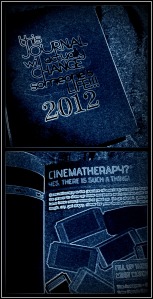 My Man and I watched Puss ‘N Boots yesterday before he went back to the Metro. This is in observance of  my pledge to catch more flicks with him this year. This movie was shown last year and this offered the back story of Puss ‘N Boots prior to meeting Shrek and the gang. It was a film fit for kids but it has a cool humor that even adults would appreciate. We sure did. 🙂

Originally, I intended our movie times to be on the actual theater because that would be easier for me to watch the show but with last month’s Real Steal, it seems that we have yet to catch something on the big screen. We could have done that with Ghost Rider, but obviously I went solo with that one. But so far, one movie a month is not bad at all and I am happy with how things are going.

Interestingly, the journal that My Man bought for me (thank you, Babe) had something to say about this year being the year for Cinematherapy. I am sure he did not intend to buy me a journal with that concept in but it was a cool coincidence since that is really the direction where I am going. According to the journal, watching movies improves mental health, draws up inner emotions, and provides a safe release for those feelings. I really never thought of that before. Maybe this is why I am in poor mental health? 😆

At least there seems to be a lot of good movies coming out this year. We are anticipating The Avengers heavily (Thor is so hot!). We missed Sherlock Holmes 2 on the big screen though. Bummer. But in the end as long as My Man and I spend good time together, I guess I’m okay with that, cinematherapy or not! 😉