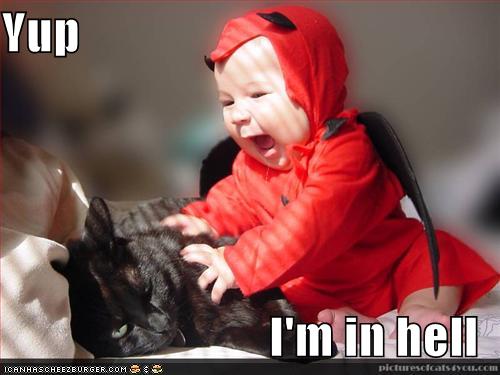 What it is: The book is one whole tour of hell; the tour guide, Madison Spencer, is a recently deceased 13 year old who lands in hell, the daughter of attention whore celebrities who have contemporary views on spirituality. It is a coming of age story where she learns to come to terms with death and makes it her ultimate adventure, away from her remotely interesting life on Earth. Damned also kicks societies’ ass and its views on life and the afterlife, right and wrong, who goes to Heaven and Hell, and basically anything and everything popularly believed to be righteous and crooked. But I liked how it pointed out that “you stay in Hell until you forgive yourself.”

How Madison increased the rate of damnation in only a few days and encouraged people to die already because Hell is not a bad place after all is also very funny. I loved how she took her telemarketing job and helped people let go of their sufferings. It makes sense. Come to think of it, the book is occasionally funny and witty, not to the extent that I expected but at least there are notable times.

What I did not like about it: This is not a long book but it took me five solid days to read it. I took the narration pretty badly. The part where Madison masturbated an angry demon to save her friend also made me barf. The characters are all dead dead and even Satan was a bore; sorry but he is a far cry from John Scratch in Up Jumps the Devil. It was like High School Musical, for God’s sake. If I would pick my favorite character, I would have to say… Madison’s parents because they are totally deranged. But Damned is not totally bad, the twist is good for that matter, and the last third of the book got me going, like really going. I just wish the first 2/3 did not exist, plus the cover.

Recommended for: Whoever wants to see Hell and check whether or not they have already earned a one way ticket should read Damned.

17 thoughts on “Damned Book Review: Free Ticket To A Tour In Hell, Who’s In?”