What it is: Kafka on the Shore is a two-stranded novel between teenager boy Kafka Tamura who runs away from his father who cursed him with an Oedipal prophecy, which eventually comes true, and Satoru Nakata, a senior citizen with a mind that is the proverbial blank slate, who ended up killing Kafka’s father in his place, and who also has the ability to open and close a subconscious tunnel of some sort.

As the story of these two characters collide, the divide between dream and reality blurs; Kafka on the Shore is one big schooling on metaphysics, consciousness expansion, and the search for meaning. Filled with metaphors, riddles, potent sex, and insights on the passing of time, love and loss, openness and acceptance, the book definitely compels readers to think beyond what is real and possible and make a stretch for what is beyond the norm. There are several themes within Kafka on the Shore but the one that struck me most was the one about fate choosing man and not man choosing his fate.

What I liked about it: Hypnotizing. This is the first Murakami book I’ve read and this is the first time I’ve seen narration like this. I read Kafka on the Shore for five days; normally it takes me between one and three days to finish a book depending on how good it is, but this one I had to read in bursts because I wanted to revel in the intoxicating feeling it gave me. The ability of Murakami to tell a story is mind blowing. When I read it’s like I’m listening to music – this is a first for me and I’m so impressed with the technical makeup of Kafka on the Shore on all lengths. 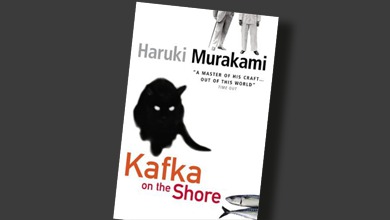 It is also very cultured. Kafka on the Shore is filled with good art, music, and literature that definitely appealed to me. The characters are also all interesting! Normally in a book there would be one or two characters at most who are interesting but in this one everybody simply is – even the talking cats! I also did not mind that everyone made sense as hell – even the cats (something I complained about in The Fault in our Stars).

What I did not like about: I’d just say it quick – I’m not mad about the plot, with all the magical realism bits and otherworldly stunts (like I mentioned in Like Water for Chocolate) but it did not matter a lot really because the ability of Murakami to narrate the story blew me away. It did not matter that sardines and mackerel fell from the sky because Nakata made it to or that I read through Kafka and his 50 year old employer having repeated sex. It did not matter that living spirits exists and that there is an entrance stone to an alternate universe. It did not matter that there are a lot of loose ends in the book, tons of riddles, and important questions left unanswered. Everything flowed like music so I just went along, enjoyed the mysteries, and had a nice time reading Kafka on the Shore.

Recommended for: Hardcore readers who don’t mind exerting more effort than the usual in understanding a book. Let’s just say Kafka on the Shore does not exactly make light reading. 😉

Photos from here and here.

21 thoughts on “Kafka On The Shore Book Review: Entering A Trance”