Street food is everywhere in Thailand. I think it’s pretty cool though I can’t say I’ve eaten much of it for my Aunt has brainwashed me prior to leaving not to be that adventurous for she fears for my tummy. But pretty much, I think Thai street food is not that far off with what we have here.

Thai food is normally fried or grilled but I find what I enjoyed the most are the fruit stalls that sell these lovely pieces of cut fruit that sits on a cold container and they’re simply refreshing and nice to eat. The best one is the guava, which is crunchy and sweet and tangy. It’s pretty much like mango, only it is not mango but guava. 😉

There’s also a lot of Thai tea stalls but they have other stuff like coffee and hot chocolate too. My sister digs the Thai tea very much. Mother Goose finds it weird and doesn’t enjoy it as much. It’s quite alright for me, these ones you find on the street, but I prefer brewing tea bags actually. I mentioned it before right, I love the Cha Raming jasmine tea. 😀

I remember, when we were shopping for some traditional Thai clothes, we went to the local plaza in Chom Thong and my sister and I found this little shop that sells some kind of Thai curry or Thai soup (I really would not know, it could be witch’s brew for all I know) among other things. I got pretty curious and took some photos and the lady asked us to have a sample of the curry.

I would have a go really but my sister was quick to decline. Looking back, I think it would’ve been more fun if I simply braced for intestinal flu than pass on most Thai food on the street. Oh well, there’s always next time. Maybe I can rectify the Thai food experience then. 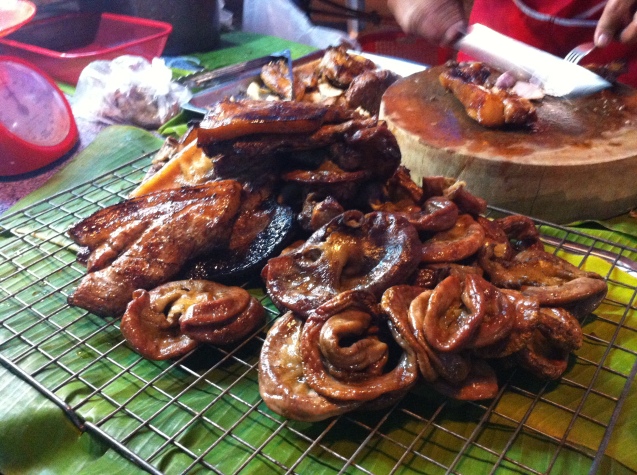 Another interesting thing is the crickets at Chiang Mai Walking Street. There’s this little stall and they have trays and trays of weird insects, not just crickets, that look fried and they may not look like the tastiest grub in the world but you have to agree they are mighty interesting. Did I get a taste? No, I did not. They’re pretty creepy but in retrospect, maybe I should have tasted them just for the hell of it. I don’t know, tasting cat food and tasting weird insects with all these names I can’t pronounce are two different things. I’ll post the photo once I get the files from my sister’s digital camera and put it up with the Chiang Mai Walking Street part of this Thailand series.