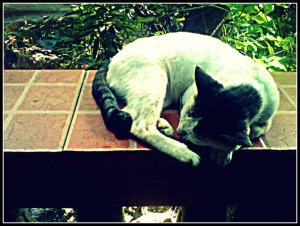 See that cat? Normally he sleeps with his back turned but this time is special because my sister just pushed him over, the same way she does every time she catches him taking a nap after lunch.

The cat must have taken it personally this time because after he landed on his feet on the soil below, he gave my sister this WTF look, the one that all cats have that can only mean, “You’re so going down” [See appendix A]. My sister did not see it because after laughing out loud she turned to wash the dishes. But I saw it alright.

What the cat did next cannot be explained. He turned to the other side of the yard and emphatically popped his anger out, made brownies without a care, his peanut hole totally facing our direction… and he did not cover his thing! HOW DARE YOU!!!

You know one of the best things, I always said, in having cats at home is that they cover their mess, but this time the cat totally left it there, liquid and hot like a mousse in all its sucky glory, as if to say, “Do you think it’s stinky? Then FTW, you can clean it up! I’m a cat, who cares? Maybe I should push you over a cliff sometime!”

I swear it was totally like that. I’m not making it up.

Appendix B: The name of the cat who pooped shamelessly and did not cover it is Stroke. You can’t totally see his face on the photos for his protection. Also, we have five cats with the name of Stroke. We can’t figure who’s who so we just call everyone Stroke. Some belong to our neighbors but are ours come feeding time.

Note to Appendix C: He is not sad and he totally does not need ironing. He is Mother Goose’s Chinese Shar pei, so.